This year, Joel and I attended the National Cohousing conference in Madison, WI, put on by the Cohousing Association of America along with two current members of the Bloomington Cohousing community to help spread the word about our growing neighborhood and to continue to be active in the cohousing community at large. This was the first in-person conference since the onset of Covid. It was such a pleasure to reconnect with the greater Coho community and to see old friends again.

Along with meeting folks from quite a few different cohousing communities, we made some connections with a young architectural firm out of Louisville (https://studiocohab.com/), as well as a few people from the Foundation for Intentional Community (https://www.ic.org/). It was inspiring to interact with motivated folks of all ages at this year’s conference. The craving for connectivity and community, across generations, was palpable at the Madison meetings. The conversations in which we engaged certainly reaffirmed our commitment to the cohousing model!

The seed of Bloomington Cohousing was planted with Marion Sinclair, a Bloomington resident who had been dreaming of creating a cohousing community in Bloomington since the 1990s. Cohousing is an intentional community built upon connected relationships within the community, a smaller neighborhood footprint, private homes, common spaces with amenities, and shared values.

To make her dream a reality, Marion purchased land at the current site in the early 2000s where she and her friend Janet Greenblatt worked to build a cohousing group that would plan the physical community. After years of starts and setbacks, Marion approached me about building a cohousing neighborhood. Although I was initially unfamiliar with cohousing, I was inspired by Marion’s vision and plan. We took on the project as a company, purchasing the land from Marion and beginning the initial phase of construction, and so on to the present day. Sadly, Marion passed away unexpectedly in early 2019 and was not able to see her vision actualized. Yet Marion’s passion, drive, and commitment continue to inspire us as we embody her spirit and vision of community, shared support, and collective decision-making.

Bloomington Cohousing is Indiana’s first cohousing community, in Bloomington, IN. It is an intentional community made up of 26 private homes nestled within a ten-acre nature conservancy and located minutes from downtown. 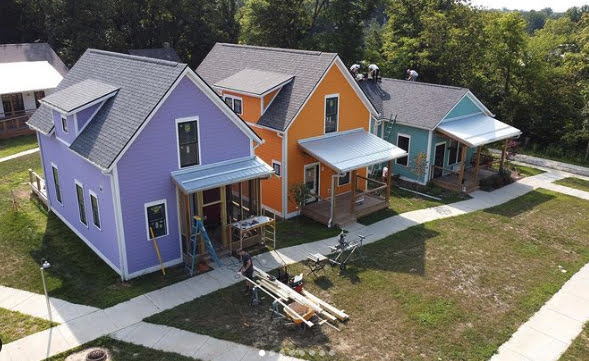