These homeowners contacted us to help them design and build an addition on the backside of their Bloomington home. During the design process, our architects Ernesto Castaneda and Alex Minor, met with the clients multiple times to discuss their wishlist and project timeline. The team was able to design an addition that featured a larger, relocated kitchen over a finished basement and a deck was designed to access the yard from the kitchen via double doors. These clients loved their existing home and location, however wanted to update the home and add-on to the existing space to optimize the function and layout. The design solution by Alex Minor and Russ Herndon included a new addition, a new primary suite with bedroom and bath, and a large open kitchen/dining/living area to fit their lifestyle and gatherings needs. These clients contacted us with the intent to reclaim their outdoor space on the Southeast side of Bloomington. The deck that was originally installed on this custom home was starting to lose its original luster. The treated boards and framing had taken on quite a bit of moisture and were rotting in places. Our team was hired to demolish the old deck and build back something more functional and safe. We worked with their son who is an architect out of Hollywood, California to reimagine the space altogether.

Franklin Studios laid out the plans for a larger open deck area with a curved railing. One challenge was to tie in an existing screened area to seamlessly transition to the new deck. Our crew framed the 450 square foot deck after tearing down the existing structure and pouring new footings for posts. 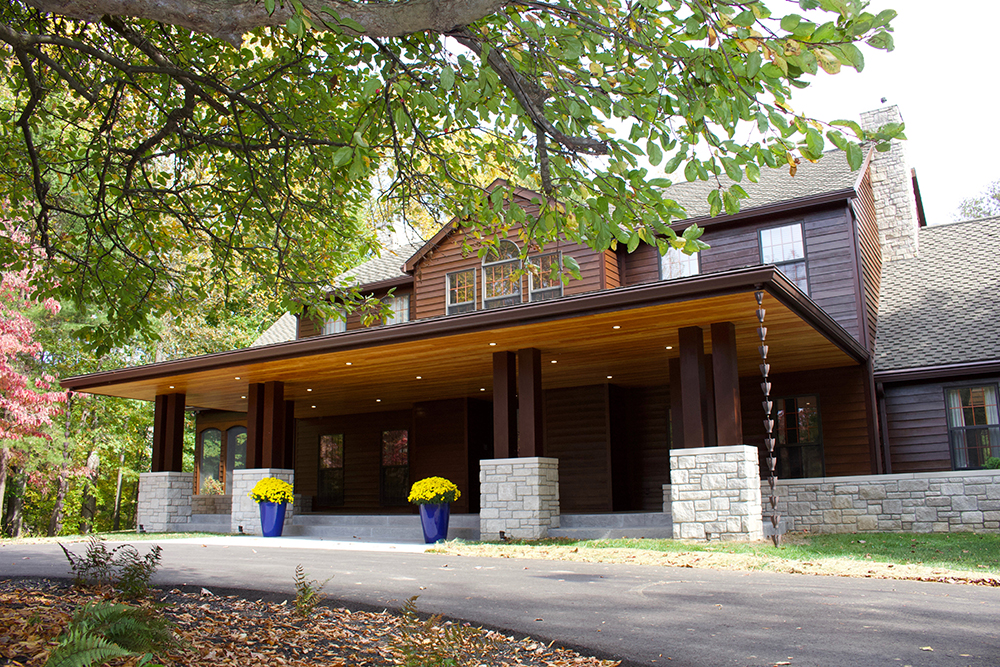 The homeowners of this classic country estate contacted us about fulfilling a vision that had been formed years earlier. Russ Herndon, a current member of the LWB design team and former owner of Russ Herndon Design, had drawn a front porch addition for the clients about 15 years ago. Our clients were now ready to execute the porch design to complement their two-story traditional colonial that was custom-built in the early 1990s. These clients reached out to us wanting to update their weekend home on Lake Lemon. They wanted us to conceive a design that would re-invent their beloved weekender, maintaining the intimate scale and proportion; while giving it a “wow factor” with upgrades throughout. Their hope was to have it ready for the upcoming boating season.